A Party for 90 on Backyard Meadow Creek Equipment 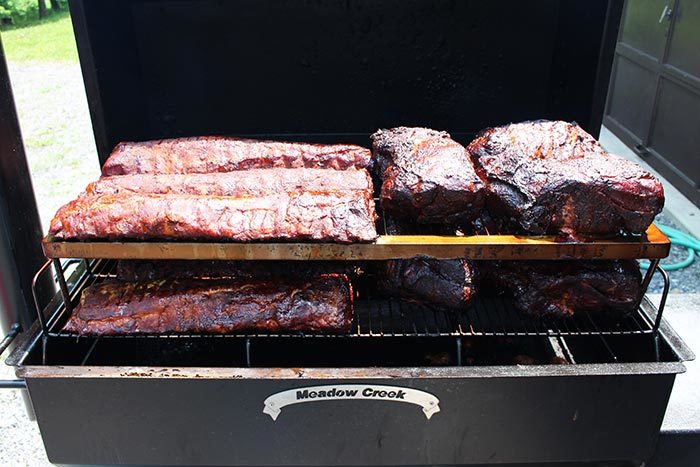 Last week we cooked party wings, baby back ribs, and pork butts for 90 people at the annual Fisher’s Country Store employee picnic. I used my Meadow Creek SQ36 Smoker to smoke the ribs and pork butts and my BBQ26S Chicken Cooker to grill the wings.

The evening before I prepped the butts and ribs. The next morning I got up early to clean my smoker and got the butts on by 8:00 am. By 6:00 that evening we delivered the meat. It was a long day, but very rewarding to master the challenge of cooking for a crowd and see so many people enjoy it.

Read on to kick your appetite in high gear… 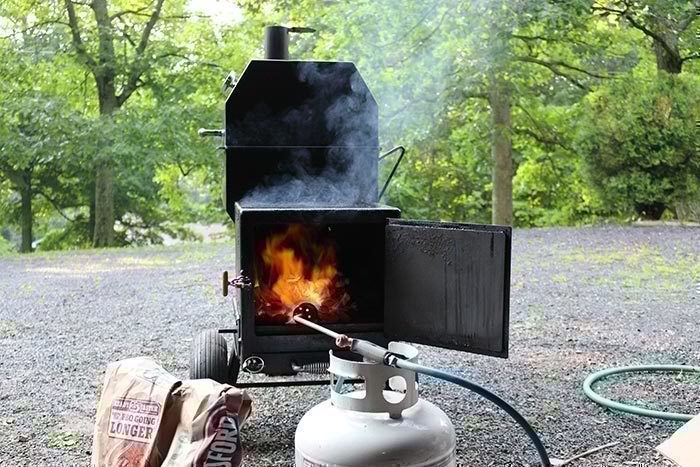 There were four Boston butts. I removed most of the fat caps and seasoned them with Meadow Creek Brisket Rub.

The butts went on the smoker at 8:00 am. Once they were dark enough, we wrapped them in foil and put them back on the smoker until they were done. I expected them to get done by 4:00 with this method. Dinner was at 6:00, so I thought we’d have adequate time to pull the meat and get cleaned up to hit the road by 5:30. I guess some of the pigs had a hard life because the stubborn things just refused to hit 200 degrees even by 5:30!

Some of the meat was just perfect and easy to pull, but parts of it was still in the 180s and not ready to pull. I had no choice but to chop some of it. We mixed it with the looser stuff, added some sauce and seasoning, and it worked just fine.

Trimmed and seasoned, ready for the smoker Ribs and butts on the smoker

Ribs and butts before the wrap There were six racks of baby back ribs. Some of the baby backs I get have extra slabs of meat and fat. I trimmed them up a bit, removed the membrane with my catfish skinner, and seasoned them with my homemade rib rub.

One batch of the rub does three racks of these baby backs; I had a little less than that on hand, so I finished it off with Meadow Creek Brisket Rub.

We cooked these ribs similar to those in my recent “12 Racks of Ribs” blog post, wrapped in aluminum foil for part of the cook. This time I was really careful when I wrapped and unwrapped the ribs, and they finished up beautiful. They went on at 11:00 am and finished at various times; I was able to take them all off by about 5:30.

Some people use a time method such as 3-2-1. This works as a guideline, but I think it’s important to proceed to the next step once the ribs are ready. First, I left them in the smoke (unwrapped) until they had a nice smoke color that suited me. Then we wrapped them in foil, adding apple juice, brown sugar, and sauce. Once they pulled back on the bone and seemed tender enough, we removed the foil and put them back on the smoker. This final stage only takes 20–30 minutes; I just want the moisture and sauce to set up a bit. (I’m getting ready to publish these methods as a new recipe, so if you’re interested, stay tuned!) 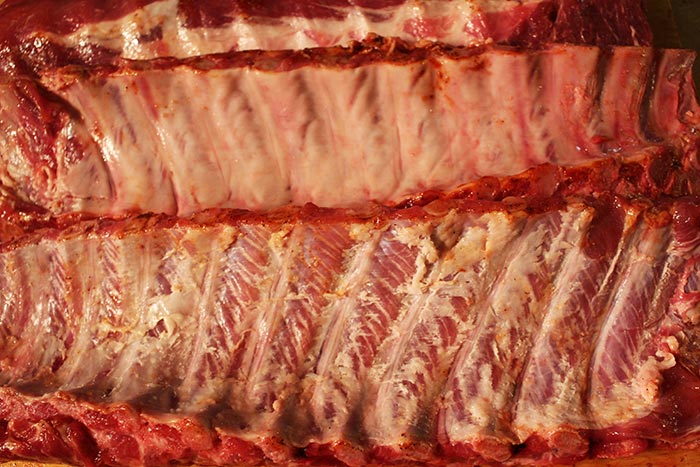 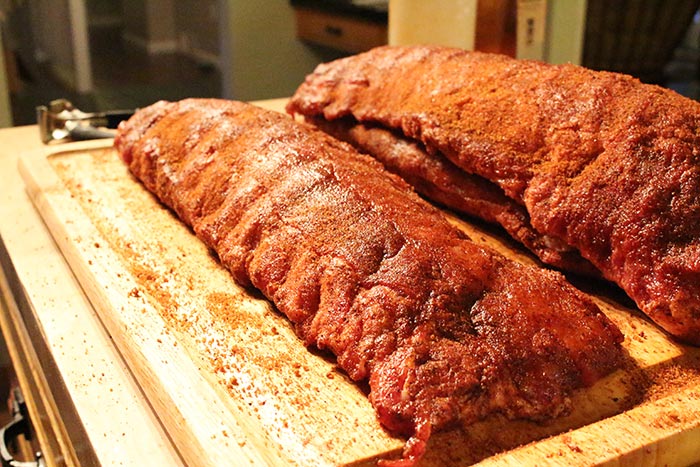 The party wings come from my meat supplier in handy ten pound bags. The Meadow Creek BBQ26S holds about 75 pieces which is a little more than ten pounds. We grilled two batches, one with Meadow Creek Gourmet Seasoning and the other with a jalapeno seasoning. 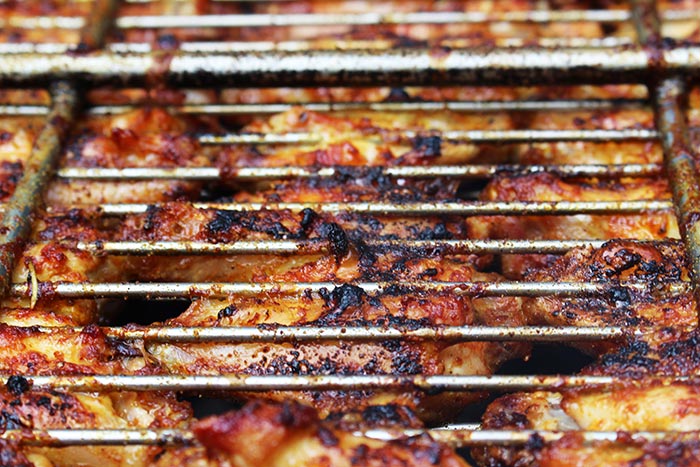 I didn’t get any photos of the food tables, but we set up a couple of chafing pans (full pan size) to serve the meat out of. The meat was all in half pans except where we ran out and had to use a slightly bigger pan for some of the meat which had to be slightly crunched to fit into the chafing pan. (I have 30 half pans in my stash now!)

There were four half pans on display: pulled pork, ribs, regular wings, and spicy wings. The extra pans were kept warm in a chest until needed.

In all, we had at least ten half pans of food. Most of the wings were eaten; we only had a handful left. About half of the pulled pork was left, which filled almost nine quart size freezer bags. There was a half pan of ribs left too, so we could have gotten by with a couple less racks of ribs. It can be hard to know how much food to cook, but it worked out perfectly with some leftovers to savor in the days to come.

PS. Itching to start cooking for events? I hope this story has inspired you with how much amazing barbecue you can crank out with small backyard smokers and grills, such as my SQ36 Smoker and BBQ26S Chicken Cooker.

Cooking for 100+ People on a Meadow Creek Wood Smoker

How to Cure and Smoke Turkeys in the BX50 Smoker

Fantastic report on both cookers! I had a large offset smoker that my church gave me as a gift. It was really to large for what I really wanted to do. I sold it to a couple in my church last week who had borrowed it for their restaurant. Ive been looking and praying about the SQ36. I live out of state and plan to call soon in regards to pricing and freight. I’ve been receiving emails from you for 4 yrs. your information has been so valuable to me as a beginner. Maybe I will decide soon. GOD BLESS!

Just curious about the Pork Butts that were not quite done,, where were they on your cooker, like on the end or in middle? I’m curious about the temp difference from one end to the other on the SQ36. Thanks, Richard

They were on the end by the firebox. There is a little difference between the left and right ends or the top grate and the bottom grate, but I’ve never measured it and I don’t think it’s enough to worry about. It’s a pretty fine smoker considering it’s not reverse flow like Meadow Creek’s TS models.

I operate a TS250 w BBQ42 and absolutely love them both. But I’m curious about the wings you cooked as I see no seasoning. Was the seasoning added while wings were in the grates? I ask because the color is phenomenal!

Yes, we normally season the chicken after it’s on the grill. I used Meadow Creek Gourmet Seasoning for the first batch, which gave it a yellow hue.

Looks good there Lavern. Do you ever inject the butts ?what about mop ?

I like to keep things simple, so I’ve never injected, but do want to try it sometime. Haven’t mopped recently but I have done a lot of spritzing with apple juice. I also like to use a butter mop made of melted butter, apple juice, and barbecue rub.

hi lavern i have a question regarding the wings.How long did the wings take in comparison to bone in chicken thighs which take about an hour to cook?

I would say if all things were equal, the wings would cook in 60-70% of the time. But it will depend on how hot you fire the grill, etc.