12 Racks of Ribs on My Meadow Creek SQ36 Smoker 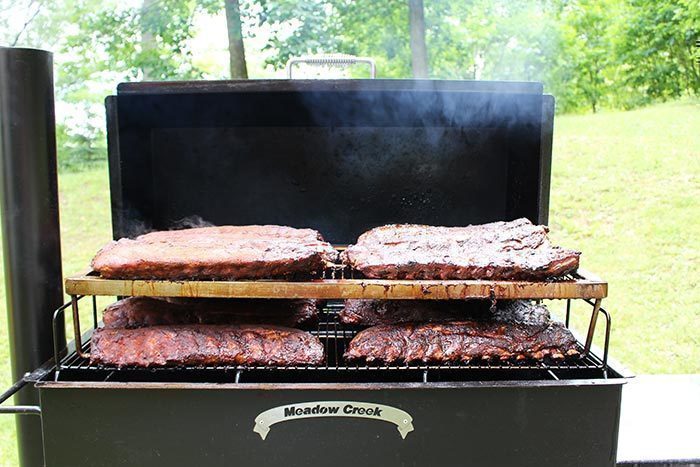 As mentioned in my homemade rib rub blog post earlier this week, I had the opportunity to cook a bunch of baby back ribs and shrimp for a small gathering last week. This post is not a step-by-step recipe on how to smoke ribs (I’m hoping to tackle that in an upcoming post). But for now, a pile of photos to tingle your taste buds and a few lessons about cooking ribs on a Meadow Creek SQ36 Offset Smoker.

Because of poor planning on my part, the ribs didn’t get put on the smoker until 11:00 AM, and I needed to leave the house by 4:30 PM. We were also peeling, marinating, and grilling 10 pounds of shrimp on my Weber Kettle Grill, mowing the grass, PLUS packing for an impromptu weekend trip. So while it was a lot of fun to cook the ribs, it was not cool being rushed because stress is no fun and the rush tripped me up in my quest for the perfect rib.

I must say Aaron is spot on. These ribs were thicker than some I’ve done, and I knew they would not get done in time unless I push it. So in desperation I fired the smoker to 250–275 (according to the thermometer in the lid). At the bottom grate level, I’m sure the temperature rose above 300.

As a rule, I don’t normally rotate my meat on the SQ36, but there is a slight hot spot on the end toward the firebox. When you’re cooking at 300 degrees, this is amplified. Besides, I rarely fill the smoker with just one cut of meat and the items finish at different times anyway, so I treat them accordingly, but when you have the smoker full of ribs, you can see the effects of the hot spot. There was not much empty space on the grates, and I’m sure that helped to restrict air flow, and air flow is vital for consistent temperature.

You can see the effects of the hot spot partway through my cook in the photo above. When cooking at 225–250 degrees F and with more breathing room on the grate, the results will be fairly consistent.

Because I had to cook hotter and the grate was full, I should have swapped the ribs at least once during the first part of the cook and wrapped them sooner than I did. Had I done that, I believe the results would have been fantastic. I got a case of 18 frozen baby back ribs and cooked 12. The ribs were meaty and trimmed nicely. I used my catfish skinner to pull the membrane off. I LOVE this picture because it makes the job look easier than it really is! LOL 🙂 Joking aside, this little tool has amazing grip and makes an otherwise difficult job achievable. These ribs were mostly okay without trimming. There were some loose flaps of meat and fat or extra thick parts that I trimmed off. I also shortened some of them so that two fit on the grate lengthwise. I sprinkled my homemade rib rub over the entire surface of the ribs—top, bottom, and edges. Within a few minutes the seasoning turns into a wet “paste”. See the difference between the dry and wet ones above. Here they are, ready for the smoker. The smoker is fired and ready to go. These baby back ribs were narrow enough to fit three deep and with a little trimming, two wide. My second tier grate doubled the number of racks I could cook at once. This will vary for the type of ribs you have. After about 3 hours in the smoke, we wrapped them in foil with some barbecue sauce, a sprinkling of brown sugar, and a little bit of apple juice.

I’m partly guessing on the times. I like to use the time stamps on my photos instead of making notes of when I do each step, but I just got a new camera and neglected setting the date and time. Now it’s a week later, and I can’t remember what all happened that day. Once wrapped, the ribs went back on the smoker. At this point they were smaller, so they fit cross-wise on the grate. After a couple hours in foil, I put them back in the smoke and drizzled some sauce on top of each rack and smoothed it out with my gloved hand. Pretty awesome stuff! A little too much heat, but hey it’s better eating than what many people expect in life. See how the bottom of this rack responded to the heat. I delivered the ribs in this cooler, lined with foil.

A couple of the racks got burnt pretty badly and some of the ends were overdone, so I only took about 9 racks. This could have been avoided if I would have rotated the racks and wrapped them sooner. Or better yet, gotten my rub mixed and my charcoal bought the day before so we could take it easy “because good barbecue just takes a while”!

Thankfully, we had plenty of ribs and everyone greatly enjoyed the meat. At the end of the day, that’s what really matters.

PS. Look for my upcoming post with step-by-step instructions and photos on how to smoke pork ribs.

PPS. Looking for a dependable backyard smoker with enough space to cook for a small crowd? Or perhaps a trailer unit that will feed hundreds? Check out our full line of Meadow Creek Smokers.

Great rib article and photos!
We all have at one time or another have been up against a deadline or had to speed up the process.
Like you it usually happens to me when I do not do some of the prep the nite before or am too busy cleaning the grill that am. Boy we learn slow sometimes.

My question? Where do you get your ribs by the case? If I remember correctly, you now are in Iowa which is the pork capital of the world. Do you buy from a local butcher, a local pork product distributor, or do you by from one of the top
hog growers who specialize in select top quality meat?

I have found a big difference in ribs depending where In buy them, especially in the amount of meat on the rib and its tenderness. When I do not smoke myself, we often go to Famous Dave’s as he has the meatiest and great tasting ribs!

Thanks for your input! Gary

Thanks for chiming in, Gary. 🙂 I live in Bedford, PA, but you’re right Marlin has our dealership in Iowa. I get meat through a local bulk food store with a deli. They special order from several different vendors. I also get meat from the local grocery stores and Costco has great stuff. –Lavern

Used my TS70 for the first time today. I did 3 racks of Baby Backs. After three hours I had to take them off. Got too black and fell off the bones. Real tender and tasty but overcooked for sure. My problem was/is I couldn’t throttle down the temperature to 200 to 225 degrees. Closed drafts but the temp’s still rose up to almost 250 degrees. I will say I was impressed that the temp’s stay steady far longer than my last smoker. I guess with practice I will get the hang of it……I hope.

I’m sure you will get the hang of it! It sounds like you might have had too much fuel in there which will make it impossible to throttle down while maintaining proper air flow. When you close the vents, you will have other problems, such as over-smoking. Keep us posted. –Lavern

Your singing to the choir… My wife asks me” Why do you
spend two days fretting about a “smoke-out”… aka….” cook-out” event”…

But boy do I love it….Thanks for the rubs, sauce, and ALL…that you do to keep me smoked-up. Blaine Everhart, Dunn, N.C.

WOW awesome looks great thanks for the tips.